With the first phase of the comment period on the agency's open-internet proposal closing this week, trade groups from far and wide were among the many to speak up. The Internet Association even created an infographic to get its point across.

A few weeks back, Last Week Tonight host John Oliver did more to bring attention to the issue of net neutrality than has an extended lobbying effort by the industries that would be affected by it.

Oliver’s 13-minute segment on the net neutrality plan compared FCC Chairman Tom Wheeler to a dingo eating a baby. No, really (it’s about six and half minutes in):

The HBO host’s comments on the FCC chair, who used to work as a lobbyist for the industry he now regulates, drew a lot of laughs (and a denial from Wheeler that he is not, in fact, a dingo). More impressively, Oliver’s impassioned plea got people to comment on the FCC’s open-internet plan en masse, a development Wheeler noted himself last week:

We’ve received about 647k #netneutrality comments so far. Keep your input coming — 1st round of comments wraps up July 15.

The comment period that Oliver drew attention to ends this week (a second round will open later this month), and trade groups are starting to get in their final words on where they stand on the issue of unfettered internet access: 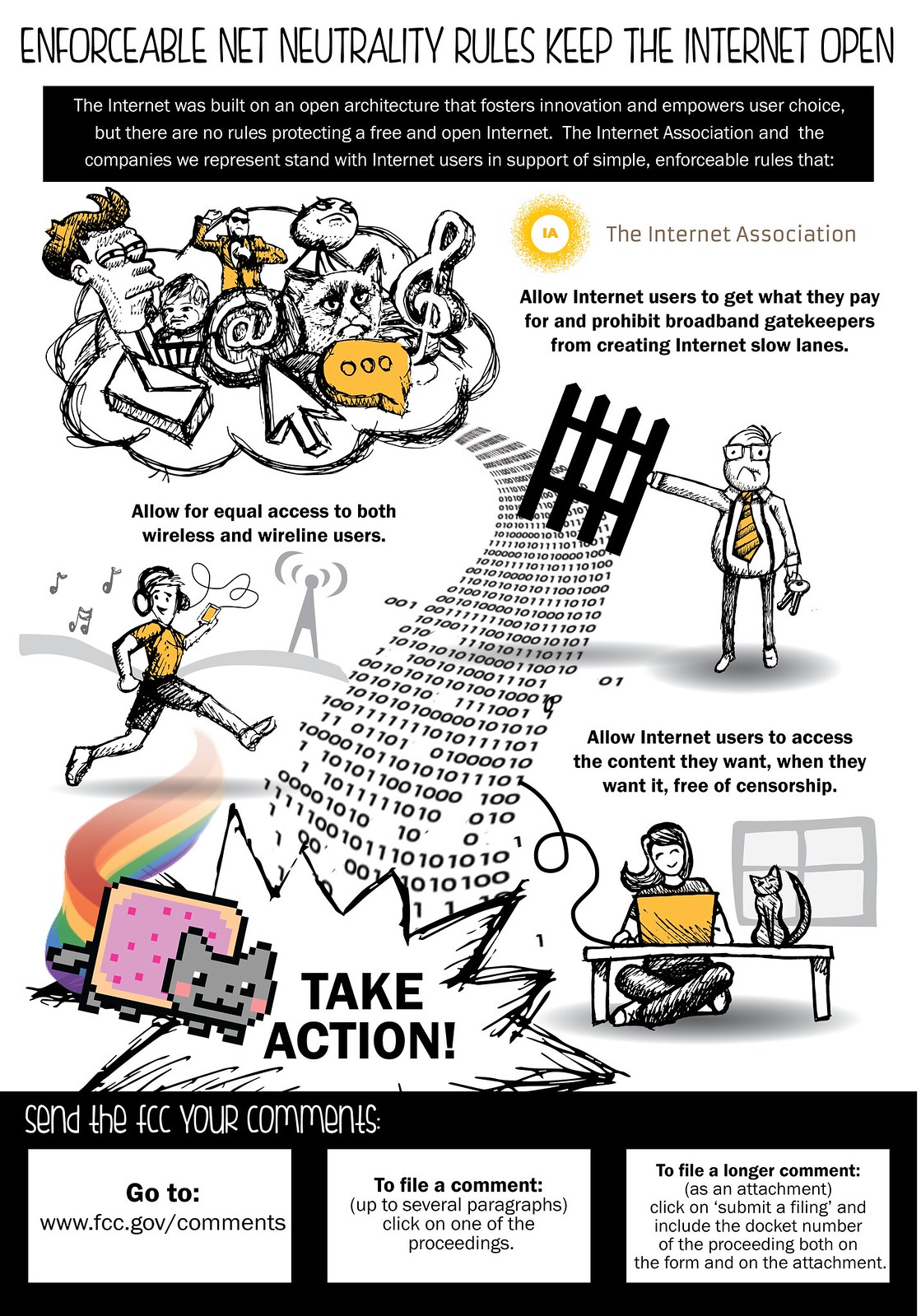 Tech companies: Drawing perhaps the most attention Monday, the Internet Association argued strongly and in-depth [PDF] about the economic benefits of open internet access and the need for “uniform rules across platforms”—whether desktop, mobile, or other. “Segregation of the internet into fast lanes and slow lanes will distort the market, discourage innovation, and harm internet users,” IA President and CEO Michael Beckerman said in a statement. “The FCC must act to create strong, enforceable net neutrality rules and apply them equally to both wireless and wireline providers.” The group even created an infographic (above) that broke down the key points of its comments to the FCC.

Creators: The Future of Music Coalition, a group that focuses on the rights of musicians and song publishers, recommended that the current net neutrality proposal be scrapped in favor of reclassifying internet access as a public utility under Title II of the Communications Act. “In doing so, the commission would better serve the interests of creators and the public,” the group said in its comments.

Education groups: A coalition of 10 major education and library groups—including the American Library Association, EDUCAUSE, the American Association of Community Colleges, the Modern Language Association, and the American Council on Education—offered a set of “Net Neutrality Principles” as recommendations to the FCC. The suggestions include measures to ensure neutrality on public networks, to prevent degradation of service, and to allow for reasonable network management, but to block paid prioritization of content. “Prioritizing certain internet traffic inherently disadvantages other content, applications, and service providers—including those from higher education and libraries that serve vital public interests,” the coalition’s recommendations state [PDF].

Telecom groups: Wireless and cable industry groups expressed concern about perceived wavering on the issue and strongly argued against regulating internet access like a public utility. CTIA: The Wireless Association (once headed by Wheeler) said that such a policy would hurt innovation in the industry. “The constantly evolving wireless ecosystem, which has brought so many revolutionary changes to the way Americans live, learn, and work, should never be regulated like a utility,” CTIA’s comment stated. In a May comment, Broadband for America said critics of the net neutrality plan were missing the point. “As demonstrated repeatedly, the future of the open internet has nothing to do with Title II regulation, and Title II has nothing to do with the open internet,” the group stated. “As it did in 2010, the commission should categorically reject efforts to equate the two once and for all.” Meanwhile, Rick Chessen, senior vice president of law and regulatory policy for the National Cable and Telecommunications Association, wrote that a utility reclassification would be “immensely destabilizing” to the industry.