The association representing craft brewers around the country says its industry is continuing its long-running trend of double-digit growth. Even though craft brews didn't hit record levels last year, the association says it's not worried—because it's a sign the industry is going mainstream.

If you’re curious about how the Brewers Association comes up with its estimates each year, you’re in for a treat: On Tuesday, the association’s chief economist, Bart Watson, explained the process he uses to formulate the annual report. Watson noted that while most breweries provide their data directly to the association, some don’t, in which case the organization estimates the taxable production of those breweries. “If you’re in one of the states that publishes brewery production data, or will give it out in response to a Freedom of Information Act request, we use that state number,” he explained. “Note that many states still haven’t published their final annual numbers.” Let’s just say that Watson knows how to track down beer.

The association representing craft brewers around the country says the industry is continuing its long-running trend of double-digit growth. Even though craft brews didn’t hit record levels last year, the group says it’s not worried—because it’s a sign the industry is going mainstream.

The craft-beer industry is still growing by leaps and bounds, and as craft brewers continue to cut into the market once ruled by large breweries, the trade group that represents small and independent brewers says the industry is maturing—and that’s a good thing.

This week, the Brewers Association (BA) released 2015 data on the industry, reporting a 13 percent rise in volume and a 16 percent increase in retail dollar value. And while the beer market as a whole contracted slightly in 2015 (by 0.2 percent), craft brewers were still reporting double-digit growth.

The numbers are impressive, but those with sharp eyes and good memories might have noticed that the growth numbers are off slightly from 2014, when the industry reported an 18 percent volume increase and a 22 percent jump in retail dollar value. BA Chief Economist Bart Watson explained to Brewbound that a few factors are responsible for the change, including the maturing of the industry and the acquisition of some craft brewers by large beer manufacturers, which makes those brands no longer eligible to be included in the report.

Thus, companies that no longer meet the association’s famously tight definition of what constitutes a craft brew, such as Lagunitas (now part of Heineken) and Ballast Point (owned by Constellation brands), were counted in the data only for the part of the year before their acquisition.

“As the industry matures and moves into the mainstream, slower growth is a natural part of that maturation,” Watson said.

But even if the numbers aren’t record-setting, they still show a level of success that goes far beyond a mere fad.

“For the past decade, craft brewers have charged into the market, seeing double-digit growth for eight of those years,” Watson said in a news release. “There are still a lot of opportunities and areas for additional growth. An important focus will remain on quality as small and independent brewers continue to lead the local, full-flavored beer movement.”

Want more details? Check out BA’s full infographic here or the highlights below: 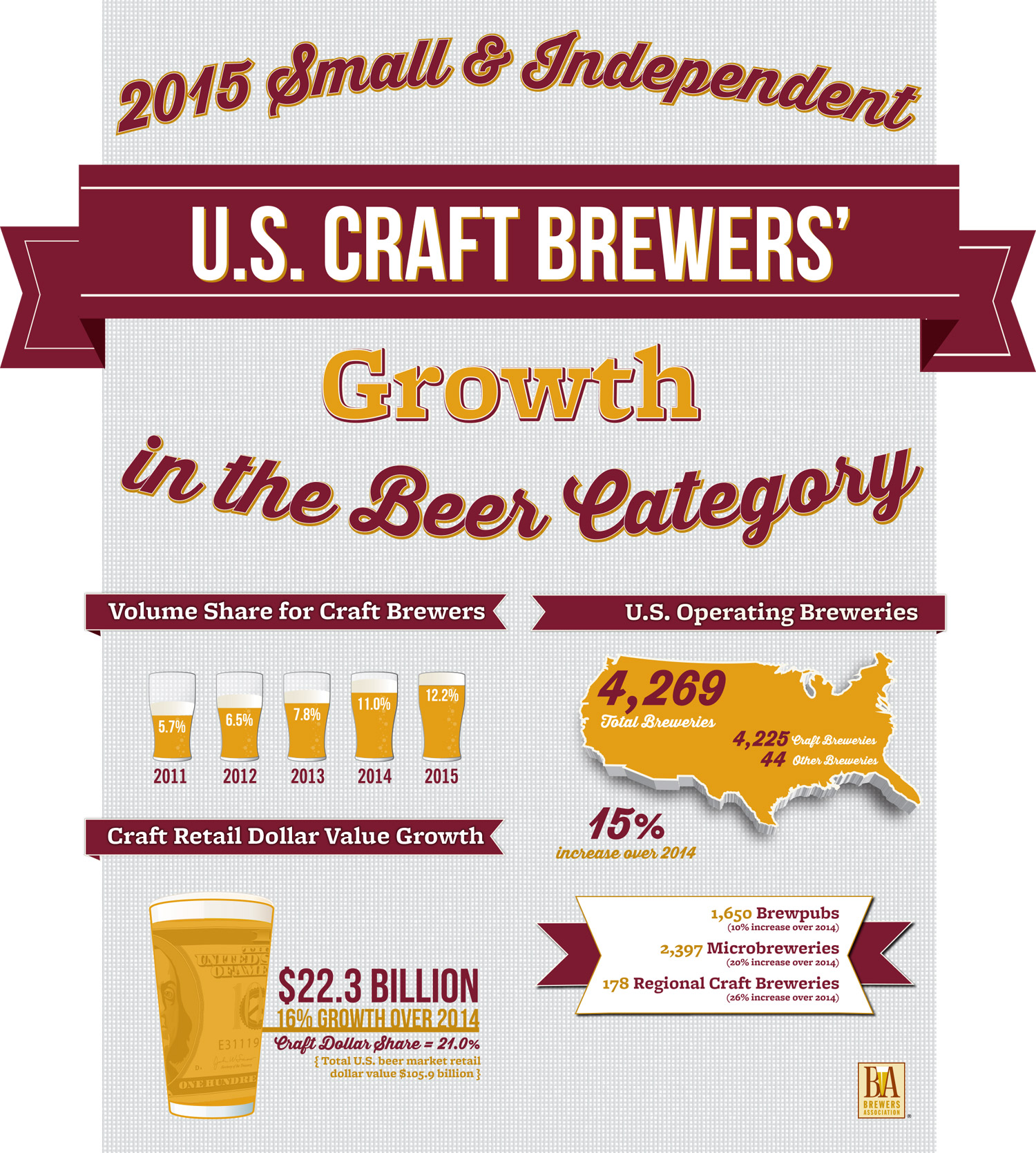